Sorry for the delay, but we were just way to tired to get this blog done yesterday.  We started the day bright and early and left the hotel at 0730.  We headed straight to the Great Wall of China.  The section that we went to is called the Mutianyu Great Wall and was about 1 hr 15 min outside the city.  Our guide said she thinks it is one of the most beautiful sections.

They started construction on the Great Wall during the 7th century B.C.  It started out as individual walls that different provinces were constructing to protect themselves.  Eventually when all the provinces came under one ruler they started the process to connect the walls.  There was approx. 1 million people involved in the construction of the Great Wall (approx. 1/5 of China's population at the time).  They say that the Great Wall is the longest cemetary in the world b/c as workers would die they would bury their remains in the wall.  The entire Great Wall is over 5,000 km. The section we visited has 22 watch towers, with 14 still being open to the public.  I

t was really amazing to see.  We took the cable car to an upper section, which was a cool experience until we realized that our poor guide had a look of terror on her face.  We asked if she was afraid of heights and at first she said no, and then she said, "well maybe a little."  Based on the look of her face I would say maybe alot!  She was a trooper though and took a picture of us ascending.  They don't tell you that you have to walk the great wall until you can walk the Great Wall.  There are inclines going up everywhere until you actually get to the entrance.  Truthfully I was shocked, b/c I was one of those naive people who kinda thought it was all steps.  Actually it is compromised of steps and steep inclines, with watchtowers sporadically placed.  The watchtowers are great.  You can really envision where they had their fires for heat and food, where they would have slept and where they would have taken watch to keep an eye out for enemies.  It was VERY foggy while we were there.  You could only see probably 200 feet past the wall b/c the fog was so thick.  This also ended up making it very cold.  I think we walked for almost an hour before we decided it was time to turn around b/c we still had to walk all the way back.  On the way down we stopped and did our first haggling of the trip to buy some Great Wall sweatshirts.  Overall it really was an incredible experience.  To think of how long it has been there, the things that have happened around it and how many people have actually walked on it is just amazing.

Oh and for those of you that were taking bets (and don't even try to say you were not placing bets on this) it took me under 5 minutes to fall and scrap my knee on the Great Wall of China.  In my defense I was trying to get out of the way of a photo op b/c this Grandma looked like she was gonna come unglued if one more person walked in front of her picture.  I stepped back and tripped over a small incline.  I think i did a very graceful job of then crossing my legs and sitting there like nothing had happened : )  Ok, now whoever won, the rest of you pay up.

We stopped not far from the Great Wall and had Chinese food again.  We decided on sweet and sour chicken and chestnut chicken.  It was awesome.  I was able to eat the entire meal with  my chopsticks.  Mark gave it a valiant effort, but after about 5 minutes he decided that if we were ever going to get to the airport he needed a fork.

On the way to the airport our guide showed me how to draw some Chinese characters and reviewed the words that she had taught us.  She was really great.  Overall it was great to see Beijing, but I think we could have shortened our trip a day and it would have been fine with us.  It was nice to have our own personal guide, but Mark and I are the type of people that would do better with a small group.  Someone to basically just take us places and give us the history and then cut us loose to explore.  Don't get me wrong our guide was amazing, but I think she thought we were bored when really we were just trying to soak it all in.  She did comment though that she was impressed with how many questions we asked.  She said that it was good since we are adopting a baby from China that we are trying to learn as much as we can.

We were at the airport early so we just sat and read/watched a movie.  We actually boarded on time, but then had to sit on the plane for over an hour before take off b/c of rain and fog.  Mark and I agree that this was the worst flight we have ever been on.  It was very turbulent.  The pilots I swear would just go straight up instead of the gradual incline on most trips.  The food was awful and cold and the attendants pretty much ignored us.  Then we started our descent into Guangzhou and then suddenly pulled up again.  I can't even tell you how many times we circled the city.  I think I stopped counting after 4-5.  There was no announcement telling us what was going on and it was 45 minutes after we started our initial descent before we actually landed.  I think I said a continuous prayer thru that whole flight.  It was just crazy.  We did however land safely and all our luggage arrived without further delay.

Our guide Richard met us at the airport and took us straight to the Garden Hotel to check in.  He even took us up to our room to make sure everything was alright.  There was a little basket waiting for us with some baby lotion/soap/powder, a wash mitt and a little panda bear in a Chinese outfit.  I thought that was so sweet.  Konnor's crib was also already in the room and ready to go.  I started to unpack while Richard took Mark to get us some grub.  This late at night with as tired as we were it had to be basic McDonalds, and it was Good!!  Seriously though our hotel is crazy awesome.  You can tell it is a 5 star hotel.  We have a suite, which I think will be great to give Konnor room to roam.  It is huge and very swanky.  Our other hotel was nice, but this one is spectacular.  We got partially unpacked last night, had a wonderful breakfast buffet this morning, went to the bank to exchange money, came back and unpacked more and then walked around the area a little bit.  We are right downtown and it is a really nice area.  There are plenty of shops, places to eat and we feel completely safe walking around by ourselves.  We got all Konnor's stuff together and now we are just sitting here trying not to bite our nails off waiting to leave to go get him.  As I finish this up we are 1 hour away from leaving to go meet our Son.  Truthfully we have handled everything really well.  People thought we were crazy b/c we are so calm about everything, but the reason is b/c this morning we are now both really nervous and I know  we would have been a mess if we had felt like this for more than a day.  The next time we post we will have Konnor with us!!! 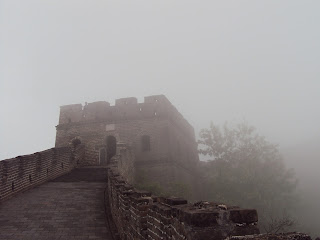