Our flight was a little delayed this morning so we didn't get to the hotel until mid afternoon.  It really wasn't a big deal though b/c the whole time we were waiting we were on the plane and Hong Kong Airlines has individual TV's that you can watch newly released movies/play games or listen to music.  We did arrive safely in Beijing.  Yuck it is muggy though : (  I know I am just going to have to get used to it for the next few weeks, but my hair has not gotten the memo and is currently trying to set a record for frizziness.

Our guide in Beijing is Candy.  So far she has been great!!  We checked in and cleaned up then took the subway to the Temple of Heaven.   There are several parts to the Temple of Heaven, but we spent most of  our time at the Hall of Prayer for Good Harvests.  Built in 1420, the Emperor would go here to pray for good harvests and rain.  We also visited the Imperial Vault of Heaven and the Circular Mound alter.  Overall the architechture is amazing.  We learned that the Chinese tend to use red and yellow in alot of their artwork and color schemes b/c red symbolizes happiness and yellow symbolizes good luck.  On alot of the buildings you will see dragons and pheonix.  The dragon represents the Emperor and the pheonix represents the Empress.

We are starting to feel our jetlag so I think tonight is going to be an early night.  Tomorrow we are headed for the Forbidden City and Tiananmen Square.  We just realized a few minutes ago that we forgot the cable to upload pictures.  Tomorrow we will start taking a few pictures with Mark's iphone so that we an at least get a few pictures uploaded.  When we get home we will put a bunch more up. 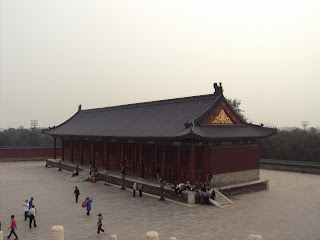 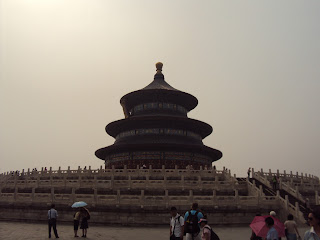